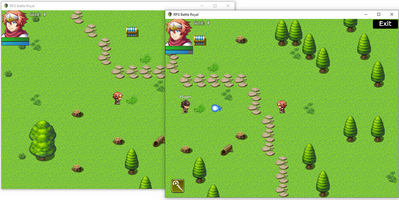 -Shield now will automatically be equiped(only one can be equiped) and can't be dropped anymore.
-New Building tool.
-New lighting and Fog system(Khas advanced lighting and fog).
-New lantern(the player will always have it equipped. It's a global light that appears for all player when one turns it on).
-Added day/night system to the default game mode(synchronized by the server).


-The client now won't replace its default tileset/audio files anymore. When making a custom map, make sure to name your tileset/audio files to something that not the same as the default ones to make sure your map works.
-Fixed: when playing the default game mode, the match won't reset anymore if there are only 2 players alive and a expectator leaves the match.
-Fixed: now even if a player joins after an event has been spawned, the event will be spawned for them aswell.
-Fixed: gramps being able to sell HP potions to people with an MP potion.
-Fixed: gramps being able to sell items to dead players and spectators.
-Fixed: opening chests on top of each other causing all chests in the same position to disappear.
-Fixed: HP bar not displaying HP percentage correctly if the player equipped a shield.
-Fixed: MaxHP and MaxMP not going back to 100 when the server resets the game.
-Fixed: MP potion not being removed from your inventory upon death.
-Fixed: a typo in server.js
-Fixed: a typo in the script responsible for copying the custom map downloaded to correct folder, that could cause custom maps to not work.
-Removed "Now Loading" image.
-Removed contents of "SceneManager.onError" from deployed version to avoid weird random errors that don't seem to affect the game but were still blocking it whenever thrown.